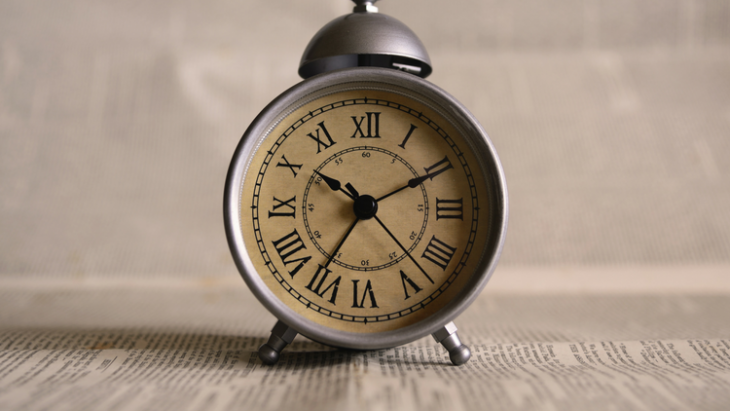 Books for When the Clocks Change: Tales about Time

This weekend the clocks change, so we picked our favourite books featuring time!

We're fascinated by time. The word 'time' is one of the most popular nouns in the English language, ranking just below the nouns 'one' and 'make'. But what do we really know about time? Short definitions include 'what clocks measure' and 'what prevents everything from happening at once', but thinking about time for any length of...well, time, makes it seem complicated.

This preoccupation is present in stories. There are hundreds of books about time travel and its possibilities: what if you traveled back in time and accidentally killed one of your ancestors? What if you fell in love with someone from another time? So, from Father Time to time travel to the scientific link between space and time, we've collected a list of our favourite books featuring time:

How To Stop Time by Matt Haig

Tom Hazard has a secret. He was born in March 1581 with a rare condition that means he ages much slower than the average human and he is now over four hundred years old. He must continually change his identity to stay safe, or the government would seek him out to perform tests on him. Or so the shadowy Hendrich says.

How To Stop Time is an engrossing story about the power of time to both change culture and conceal the fact that humans are good and bad whatever time period you live in. Plus, there's some great cameo appearances from Shakespeare and F. Scott Fitzgerald.

Do you want to learn lots of disgusting facts? It's about time! Literally. What happens if you go too close to a black hole? How do flies tell the time? Why do the years zoom past faster as you get older? Find out who was killed for changing the calendar. AND meet the tortured time geniuses who went mad working it out!

Terrible Time makes learning about the passing of time very exciting. Does that mean that time passes faster while you're reading it? You'll have to try it to find out!

Henry is one of the first people ever to be diagnosed with Chrono-Displacement Disorder. This causes his genetic clock to be triggered by emotions and memories, and he finds himself misplaced in time. Henry attemps to live a normal life with Clare, his wife, but his disorder means that he often spontaneously disappears in time. The couple attempt to live a normal life, but is that possible?

This book has become a classic of the time travel genre, and for good reason. It is an ambitious premise that packs plenty of emotional punch. If you haven't read this classic yet, there's no better time than the present...

Dor, the inventor of the world's first clock is not looked on kindly. As a punishment for trying to measure God's greatest gift, he is banished to live in a cave for centuries. He becomes Father Time, forced to listen to the anguished voices of all who seek more time. Eventually, he is granted a chance at freedom. But there's a catch: he must try to convince two people of the value of time.

This story is all about the importance of time and not taking it for granted. After all, "It is never too late or too soon. It is when it is supposed to be."

A Wrinkle in Time - Madeleine L'Engle

A Wrinkle In Time starts with the classic sentence: It was a dark and stormy night. Meg Murray is having a midnight snack with her mother and brother, when a stranger appears at their door. He tells them there is a "tesseract", or a wrinkle in time, that Meg's father had been investigating when he suddenly disappeared. Meg sets out to rescue him, but will she be able to survive her journey through space and time?

Madeline L'Engle's classic children's book is having a revival in popularity due to the 2018 film adaptation. The audiobook of the novel now comes with an introduction from director Ava DuVernay. Definitely make time to read it before you see the adaptation!

All Our Wrong Todays - Elan Mastai

The future that the 1950s imagined is real, complete with flying cars, moon buses, and no under-ripe avocados. Tom Barren lives in this utopia where there is no war and no poverty. That is, until there is a slight time-travel mishap, and he ends up stranded in the 2016 we live in. Our 2016 is a dystopian nightmare to Tom, but is it too complicated to return?

All Our Wrong Todays is full of fascinating ideas and dilemmas, and a great love story. This is great modern time travel novel with lots of witty dialogue to enjoy, which makes it ideal for people who liked A Hitchhikers Guide to the Galaxy.

On Albert Einstein Hawking Chaudhury's twelfth birthday, his Grandfather Byron gives him a letter from his father. The letter has a secret mission: travel back in time to 1984 to save his father's life. Soon, Al discovers that using time travel to save his father definitely involves setting his school on fire. And trying to make sure that his hamster, Alan Shearer, doesn't get lost.

Time Travelling With a Hamster was shortlisted for the Waterstones Children's Book Prize in 2016, and for good reason! It's a lovely, heartwarming story, but also has a central adventure that will keep you desperate to find out what happens next!

A Brief History of Time is one of the bestselling popular science books, selling over 10 million copies, and on the bestseller lists for more than 5 years. In A Briefer History of Time, Stephen Hawking and Leonard Mlodinow set out to make the information even more accessible. Hawking explains Einstein's theory of relativity, what space-time is, and why you would age faster the closer you get to a large gravitational force. Plus, this book also goes into the possibilities of time travel.

A Briefer History of Time does a great job in simplifying some of the most complex research subjects in physics for all readers. It's a really engaging and interesting science book about how the world works.

All of these books are available to borrow as audiobooks from the Listening Books library!

If you liked this post you may also like:  Time Travel: a conversation between a scientist and a literature professor.