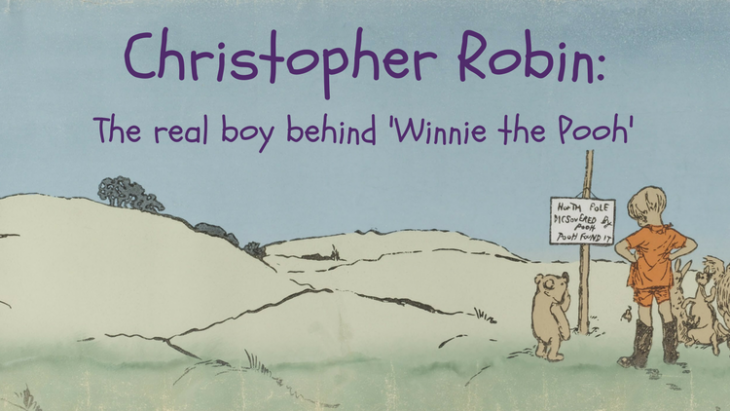 Christopher Robin: The Boy Behind the Book

Christopher Robin appears in many A A Milne stories, as the young boy who is the best friend of Winnie the Pooh.

The character was based on the real son of A A Milne, Christopher Robin Milne.  However, as he grew up, he started to hate his portrayal in the Winnie the Pooh books and resent his father.

Born on August 21st in 1920, today would have been Christopher Milne's 97th birthday. On his first birthday, he was given a teddy bear for a present, which had been bought at Harrods. Along with his other favourite toys Piglet, Eeyore, Tigger and Kanga, they became the inspiration for the Winnie the Pooh stories and poems.

The stuffed animals owned by Christopher Robin. From the left: Tigger, Kanga, Winnie the Pooh, Eeyore and Piglet.[/caption]

When Christopher Robin Milne was only four years old, his father published his first collection of poetry. Called When We Were Very Young, it was dedicated to Christopher Robin. This was an unprecedented success, selling more than 50,000 copies within the first couple of months of being published. A A Milne followed it soon after with Now We Are Six in 1927.

Although When We Were Very Young featured a poem called Teddy Bear about the escapades of Edward Bear, it wasn't until 1926 that Winnie the Pooh was first published. This was followed soon after with The House at Pooh Corner in 1928. Both books sold hundreds of thousands of copies worldwide.

These books catapulted Christopher into fame. He was named as one of the most famous children in the world by Parents Magazine, alongside Princess Elizabeth of York and film stars. A photograph caption of A A Milne called him an 'English playwright. Children's poet laureate...And he is the father of Christopher Robin.'

As a child, Christopher Robin enjoyed this fame.  However, once he went to boarding school, this changed. He was bullied for his role in the Winnie the Pooh books and began to hate the books. Later in his life, as an adult, he would say that A A Milne 'had got where he was by climbing on my infant shoulders, that he had filched from me my good name and had left me with nothing but the empty fame of being his son.'

As an adult, Christopher Robin attended Cambridge University, before becoming a platoon commander in the Second World War. He was injured in Italy, and after marrying, he opened a bookshop in Devon where he worked for 20 years. He would sign books for customers in return for a £10 donation to the charity Save the Children, as his daughter suffered from several conditions, including cerebral palsy. However, he always refused to take royalties from the Winnie the Pooh books.

Later in life, he published three autobiographies which gave information about his childhood fame as the result of the Winnie the Pooh books. These seemed to have helped him come to terms with his famous childhood. He wrote that there would be a hundred ways for a boy to hurt himself in childhood and, 'if you protect him from each of the first hundred, he is sure to find the hundred and first. Though most men can look back on their boyhood and tremble at the narrowness of some of their escapes, most boys do in fact survive more or less intact.'

As a result, Christopher appeared to have made peace with the Winnie the Pooh books towards the later part of his life. In 1979, he opened the restored Poohsticks bridge in East Sussex, saved from being replaced. He also unveiled a statue of Winnipeg, an American black bear cub who Christopher had seen often in London Zoo and was the inspiration for the name of Winnie the Pooh.

In a Telegraph piece about his friend's life, Gyles Brandreth wrote about the time that Christopher Milne arrived unannounced at a talk Brandreth was giving about A A Milne. Brandreth finished his talk by reading the famous final paragraph of The House at Pooh Corner: 'in that enchanted place on top of the Forest a little boy and his Bear will always be playing.' In response to this, Christopher apparently replied 'Yes, dammit' and laughed.

Listening Books members can borrow Winnie the Pooh and The House at Pooh Corner to download and stream.