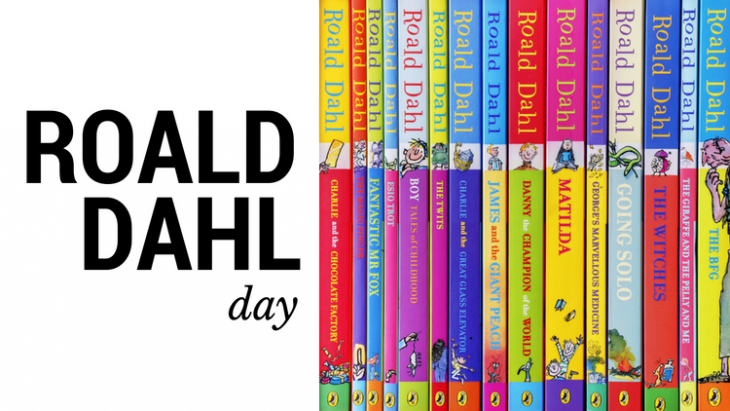 Roald Dahl Day is celebrated every year on his birthday, 13th September, and events go on throughout the month. However, this year is a very special one - Dahl's 100th birthday!

Dahl penned 39 books and many have become firm favourites around the world. His books have also been adapted into much-loved films, such as The Witches and Matilda. The most recent release - the BFG - reminds us that Dahl's influence and magic is ever-present!

His style and imagination capture the hearts of many, the Listening Books team included. So here are our favourites from Dahl's expansive catalogue.

Note: it was very hard to pick - we love them all!!

Matilda is about a very smart little girl who discovers she has telekinetic powers, which she uses to get her own back on her neglectful parents and her cruel headmistress, Miss Trunchbull. I think this is probably my favourite Roald Dahl book, even though it lead to the 6 year old me wasting many hours trying to (unsuccessfully) move objects by frantically glaring at them.

I had this on cassette tape and in print as a child and loved both the silly voices in audio and that I could devour the book in an afternoon. I definitely lost count of the amount of times I heard or read the story! I'll never forget the line about beauty coming from the inside - I think it's a very useful thing to remember in life!

A person who has good thoughts cannot ever be ugly. You can have a wonky nose and a crooked mouth and a double chin and stick-out teeth, but if you have good thoughts it will shine out of your face like sunbeams and you will always look lovely.”

I loved so many Roald Dahl audiobooks when I was a child.  The Witches was particularly memorable, the story of a young boy who, while on holiday with his grandmother, discovers a convention of witches who are plotting to turn all the children in the world into mice; like all the best Roald Dahl books, it’s just a little bit creepy and amazingly imaginative!

Claire's favourite: The Giraffe and the Pelly and Me

It's about a boy called Billy who meets a giraffe, a pelican and a monkey, who are the ‘Ladderless Window Company’.  They are commissioned to clean 100s of windows in a country house and end up stopping a burglary, gaining a new home and Billy can open his sweet shop!

As a fellow chocolate aficionado I appreciated his excellent memory in the “History of Chocolate” chapter for when certain manufacturers released specific bars.

“We knew intimately every chocolate bar in existence, from the Milk Flake to the Lemon Marshmallow. Quite obviously our opinions on anything new would be valuable.”

It’s the story of a horrible couple known as The Twits who are totally revolting! Mr Twit doesn’t wash and has lots of old bits of breakfast and lunch in his beard which he eats when he gets hungry. Mr and Mrs Twit play hilarious pranks on each other, like Mrs Twit putting worms in Mr Twit’s spaghetti. It’s Roald Dahl’s funniest book, which is why it’s my favourite.

I think mine was The Witches - about a little boy (and his grandmother) who happens upon a witch convention, gets turned into a mouse and tries to defeat them once and for all. The witches themselves really scared me as a kid, I especially remember watching the film version which is really terrifying.

“My darling," she said at last, are you sure you don't mind being a mouse for the rest of your life?"
"I don't mind at all" I said.
It doesn't matter who you are or what you look like as long as somebody loves you.”

So there you have it - some of Dahl's greatest classics!

Do you agree? Which Roald Dahl book would you pick as your favourite?

Now all that remains, is to wish you and all Dahl lovers a great day celebrating, just as this fantastic author deserves!

From social care to the benefits system, politicians and media alike have made the case that Britain's 12 million disabled people are a drain on the public purse. ⁠
⁠
In Crippled, leading commentator @frances.ryan85 exposes the disturbing reality, and how disabled people have been turned from society's 'most vulnerable' to benefit cheats.⁠
⁠
The audiobook is available from our library now - find the link in our bio!⁠
⁠
⁠
ID: a wood background with a smart phone showing the audiobook of Crippled on the Listening Books website⁠
⁠
⁠
⁠
#audiobook #audiobooks #listeningbooks #audiobookstagram #crippled #drfrancesryan #disability #disabled #disabilityawareness #chronicillness #disabilityinclusion #disabilitycharity #ukcharity #inclusion #charitiesofinstagram