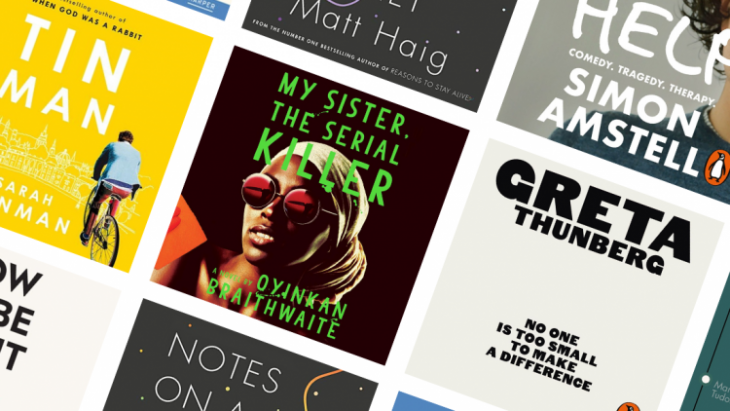 Short Audiobooks to Listen to This Month

Maybe you've come across this list because you've made a resolution to read a certain number of books this year, and now that number is seeming a bit daunting. But there are many other reasons to try short audiobooks! They are perfect for listening to while going for a walk, doing household chores, or just spending an afternoon on the sofa. Also, February is the shortest month of the year - what better time to listen to short audiobooks?

Whether fiction or nonfiction, short books can still be just as powerful as 50+ hour epics. Try this selection of some of our favourites and see what you think!

No One Is Too Small To Make a Difference - Greta Thunberg

This is the shortest audiobook on the list, but it may be the most powerful. No One Is Too Small To Make a Difference is a collection of speeches given by Greta Thunberg. In just over an hour this audiobook urges us to act to save the planet from the climate crisis. It is a stirring polemic that really benefits from being narrated by its author.

My Sister, the Serial Killer has been shortlisted for multiple awards - including the Booker Prize and the Women's Prize - and for good reason. This short novel is a breakneck satirical ride through the life of Korede and her sister, Ayoola. Both sisters have a codependent relationship with each other. Ayoola relies on Korede to help her clean up after she dispatches her boyfriends, while Korede's toxic admiration of her sister's beauty drives her to rage. Spending just over four and a half hours with this audiobook is time well spent.

Borrow My Sister, the Serial Killer from our library

This is a surprisingly touching autobiography that covers Simon Amstell's struggles with loneliness, mental health, and his sexuality, as well as being very, very funny. It is narrated by Simon himself - but it is also a bit different than a standard audiobook, as it contains audio clips from some of his previous stand-up. However, this really makes the audio version superior to the print.

Borrow Help from our library

How do you fit all the events in Henry VIII's life into just three and a half hours? Historian John Guy gives it a go. Covering the major changes to British history like the break with the catholic church, his choice of wives, and his remarkable legacy, this is a short audiobook that still packs a punch. If you've ever wanted to know more about one of Britain's most controversial Kings, then start here.

Borrow Henry VIII from our library

This book was a huge hit when it was first published in 2016 - and has gone on to inspire a one-woman show featuring Laura Linney. It is a short, but very emotive novel. Following an operation, Lucy's mother comes to visit her at hospital, and this brief visit stirs up powerful memories of her childhood. At heart, the book is about love and family, and the difficulties of relationships, especially between mother and daughter.

Borrow My Name is Lucy Barton from our library

How to be Right - James O'Brien

During James O'Brien's radio show, he often discusses politics with callers. From Brexit to benefits, he has heard many different opinions, and he works to uncover their underlying prejudices and dismantle their arguments. In How to be Right, he shows how he does it. If you've ever had a row about some of the hot button issues in politics right now then this audiobook is for you!

Borrow How to be Right from our library

Tin Man by Sarah Winman is a striking story of first love. The story follows Ellis and Michael through their teens and into adulthood. Despite this, it's a very simple narrative that nonetheless bursts with lyrical language and powerful feelings. It is beautifully read by the author, and definitely one of the short audiobooks that you could listen to twice in a month!

Borrow Tin Man from our library

Matt Haig's first nonfiction book, Reasons To Stay Alive, has been a hugely influential treatise on mental illness. In Notes on a Nervous Planet, he moves away from thinking about how his depression and anxiety affected him and instead concentrates on the link between the state of the world and rising rates of mental illness. At heart, it's central message is: it will be okay.

Borrow Notes on a Nervous Planet from our library

'Please look after this bear' says the sign hanging around his neck, and so Paddington Bear arrives from darkest Peru into the hearts of the Brown family. This is the original story of the bear who loves marmalade sandwiches. It's full of charm and nostalgia, and best of all - narrated by Stephen Fry!

Borrow A Bear Called Paddington from our library

Lanny was longlisted for the Booker prize in 2019, and is an original story about love and loss. The audiobook is quite difficult to describe - it has multiple narrators, and often utilizes them in snippets of conversation to represent the village. The effect is of an ominous atmosphere and raw emotion. Try this short audiobook and see what you think!

Borrow Lanny from our library

Are there short audiobooks you love that we've missed? Let us know in the comments!

If you liked this post you may also like: Audiobooks with Multiple Narrators or 23 Celebrity Autobiographies Read by the Author.

Esmé Weijun Wang was officially diagnosed with schizoaffective disorder in 2013, although the hallucinations and psychotic episodes had started years before that. Written with immediacy and unflinching honesty, this visceral and moving book is Wang's story, as she steps both inside and outside of her condition to bring it to light.

Following her own diagnosis and the many manifestations of schizophrenia in her life, she ranges over everything from how we label mental illness to her own use of fashion and make-up to present herself as high-functioning, from the failures of the higher education system to how factors such as PTSD and Lyme disease compounded her experiences.

Wang's analytical, intelligent eye, honed as a former lab researcher at Stanford, allows her to balance research with haunting personal narrative. The Collected Schizophrenias, narrated by the author, cuts right to the core and provides unique insight into a condition long misdiagnosed and much misunderstood.