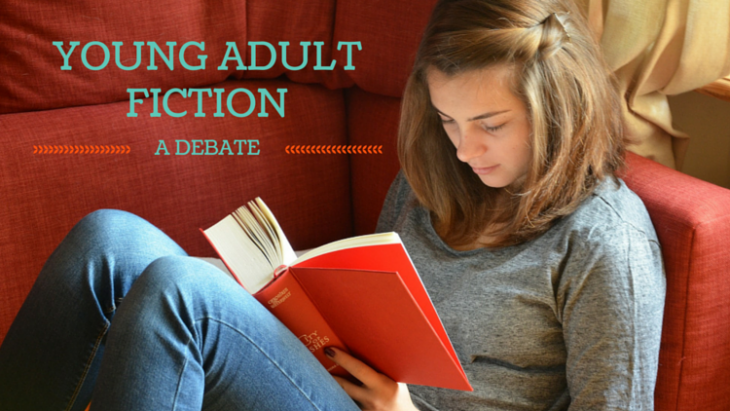 Since sharing this article last week about 'Junk', a novel that pushed the young adult genre to prominence back in 1996, an interesting debate about who YA books are for has emerged.

Many people have discussed on book blogs who YA should be read by, if can you be too old for the genre, etc. But one recent chain of articles contained some specific, and widely varying, views.

It was reported in The Guardian that this August's Edinburgh Book Festival will feature discussion on "the question of whether age-related classifications, such as the young adult genre, inhibit the way people read." Janet Smyth, director of the children’s programme at the festival, said that she worries that adults are missing out on some great fiction because it is being published as young adult.

"YA author Frances Hardinge won the Costa book of the year with her novel The Lie Tree which was published as young adult fiction but clearly of a quality to stand alongside any great adult novelist. [...] Some of the bravest, boldest and darkest fiction is currently being created but it is often too readily overlooked. If Salinger had been writing The Catcher in the Rye today it would have been classified as YA."

On the back of this, a post titled "Most YA fiction is grown-up fiction in disguise", was published on the The Guardian Books blog. It claims that the adults missing out on YA fiction aren't the big issue. The author, Anthony McGowan, suggests that YA novels may in fact be "(consciously or subconsciously) directed at older readers."

He says the main readers of YA fiction are aged over 25, and that the decline in reading when children become teenagers may be because there aren't books available that really speak to them.

The author puts forward his reasoning as to why, as an adult, he has enjoyed books categorised as YA fiction:

"I’d contend that at least some of these books appeal to me, as an adult, because they are not teenage books at all. They are adult fiction. The themes, the style, often even the characters belong in the world of adult literature. It is just some quirk of publishing that has left them washed up on the YA shore."

He sees "that “real” teenage books aren’t getting published," and identifies causes within the writing, editing and publicising processes, calling for changes to classification.

The debate did not end there.

Not only were there a swathe of views within the comments section on this last post, one blogger, Cait, wrote a response in which she says:

She highlights that a statistic linked to in the "Most YA fiction is grown-up fiction in disguise" post, shows that adults are the main purchasers of young adult fiction, but that doesn't necessarily mean that they are the ones who are reading it.

Further to this, to counter the idea that teenagers stop reading because the fiction available isn't really written for them, the blogger lists a number of other possible reasons that reading declines for many in their teens - including school and other interests and hobbies taking up their time, as well as finding reading difficult, and feeling silly for reading if their friends don't read.

She makes the point that teenagers are capable of reading and understanding a variety of books, and more than that, many enjoy books which cover "real-world issues."

"Teenagers are not stupid," she says.

She also says that maturity varies among teenagers, and so YA books with more mature characters do not automatically become adult books.

She concludes by saying that "No one should ever tell people what to read."

This debate raises a number of questions.

Are YA books classified correctly? And do adults miss out on great fiction because it's classified as YA?

Are there books available that appeal to the teen audience?

Does it really matter who the YA genre is aimed at/for? Can adults and teenagers both enjoy the genre?

We'd love to hear your thoughts!

We're very excited to announce that our next Ask the Author episode will feature Cara Hunter, bestselling author of the DI Fawley Series! 🎉

Which means, we want YOU to give us questions you'd like her to answer! Email your questions to epye@listening...-books.org.uk or send them to us via Facebook or Twitter by posting with the hashtag #AsktheAuthor

[ID: Headshot of Cara Hunter next to covers of her books: Close to Home, In the Dark, No Way Out, All the Rage and The Whole Truth on a red background]