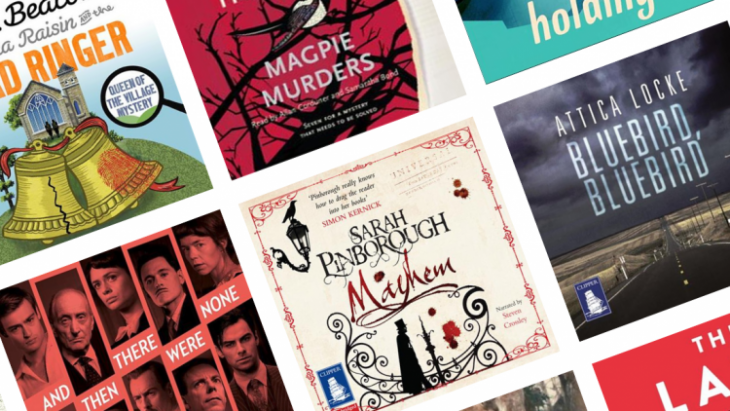 7 Books That Will Convert You to Murder Mysteries

Even though there’s always a significant number of crime fiction novels at the top of the book charts, there are still many readers and listeners out there (including myself until recently) that have never explored this expansive genre. Is there a book out there for you that will turn you into a master of murder (the fictional kind of course) or a connoisseur of crime? Of course there is! Here are seven books we think may tempt you into the world of murder mysteries.

1. Agatha Raisin and the Dead Ringer by M.C. Beaton

Agatha Raisin is a wry and witty accidental detective who became tangled up in the various grisly events of her village thanks to her natural nosiness, rather than any sleuthing experience. So if you have a curious nature but haven’t delved into the world of detectives before, perhaps you can identify with her! The books in the series can be read independently - this story is about the murder of a village bell-ringer, can Agatha clear the name of the prime suspect and unmask the identity of the real killer?

Borrow Agatha Raisin and the Dead Ringer from our online catalogue

2. The Last by Hanna Jameson

Perhaps you might prefer a murder mystery that’s merged with another genre? How about a post-apocalyptic crime thriller? After several cities across the world have been hit by nuclear weapons, twenty people remain in the Swiss hotel Jon was staying in. Far from the nearest city, they wait and focus on survival. Then one day, the body of a murdered girl is found. This means that someone in the hotel is a killer... As paranoia descends, Jon decides to investigate. But how far is he willing to go in pursuit of justice?

Borrow The Last from our online catalogue

3. And Then There Were None by Agatha Christie

This is the perfect classic Christie book to begin with if you’ve not read or listened to any of her novels before. It’s a stand-alone story so it doesn’t matter if you’re not familiar with her other characters such as Hercule Poirot and Miss Marple – I had not read any Agatha Christie books before and I found this story completely addictive! It’s the story of ten strangers, one house, a lot of murders and the race to identify the killer before they strike again. And again.

Borrow And Then There Were None from our online catalogue

Perhaps the complete opposite to a classic British mystery is what you’re after, in which case why not go for a contemporary novel set on the other side of the pond? Bluebird, Bluebird has been described as a ‘rural noir’ which vividly captures the atmosphere of its Texan setting. A story about the collision of race and justice in America, it follows Darren Mathews, a black Texas Ranger working the backwoods towns of Highway 59. Duty has called him back to his home state, of which he has deeply conflicted feelings. Two murders - a black lawyer from Chicago and a local white woman - have stirred up tension and resentment in the small town of Lark. Darren must solve the crimes and save himself in the process - before Lark's long-simmering racial fault lines erupt.

If you think you’d prefer something with a splattering of dark humour, how about the debut novel from comedian and presenter Graham Norton? The idyllic Irish village of Duneen is a quiet, uneventful sort of place, until human remains are found and retired police sergeant P.J. has to unravel years of local gossip and secrets in order to get to the bottom of this grim discovery. Often both touching and darkly comic, Norton has created an intriguing narrative that explores the complexities of human life.

Borrow Holding from our online catalogue

Maybe the perfect murder mystery for any historical fiction fans would be one set in shadowy, Victorian London. A new killer is stalking the streets of London’s East End. However, this murderer’s work is overshadowed by the hysteria surrounding Jack the Ripper’s Whitechapel crimes. The victims are also women, but when their bodies are pulled out of the Thames their heads are missing – because the murderer likes to keep them. This book is a suspenseful thriller with a supernatural element and perhaps not for the faint-hearted!

Borrow Mayhem from our online catalogue

If a twisting mystery doesn’t sound intriguing enough for you, then how about a mystery within a mystery? Alan Conway is an established crime writer and his fictional detective, Atticus Pund, is renowned for solving crimes in the sleepy English villages of the 1950s. As Alan’s editor, Susan, knows only too well, vintage crime sells handsomely. But there’s more to Alan’s latest tale of murder than meets the eye. Yes, there are dead bodies and a host of shifty suspects, but hidden in the pages of the manuscript there lies another story: telling of real-life jealousy, greed, ruthless ambition and murder. Susan doesn’t realise it yet, but Alan’s latest tattered manuscript is about to completely change her life.

We think that at least one of our choices would convert even the hardest mystery-cynic to the world of crime fiction – if you have any other ideas for great first-time crime reads then post them in the comments below!

"I was very excited by this book having previously enjoyed Greg's podcast 'You're Dead to Me', which looks back on the lives of historical figures from various time periods in an accessible and entertaining way. The book has lived up to my expectations, filled with Greg Jenner's trademark wit and lots of historical case studies. It was very easy to dip in and out of, and I feel as though I learned something new each time!"

[ID: Book cover of Dead Famous on a blue background]