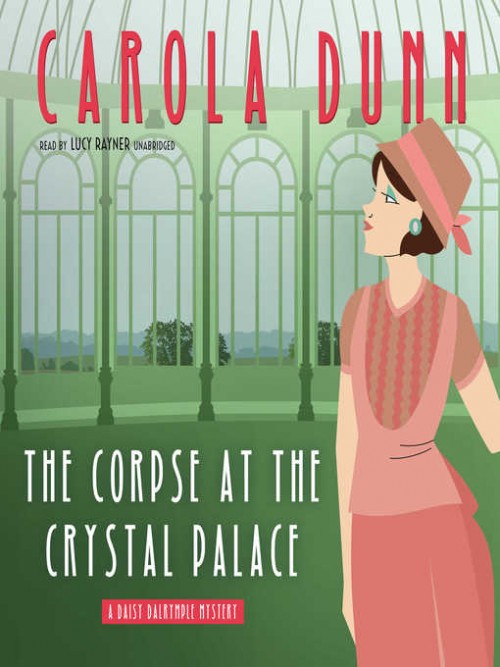 
Daisy Dalrymple is back-when a casual outing to the Crystal Palace in London takes a mysterious and murderous turn. April 1928: Daisy Dalrymple Fletcher is visited in London by her young cousins. On the list of must-see sites is the Crystal Palace. Discovering that her children's nanny, Nanny Gilpin, has never seen the Palace, Daisy decides to make a day of it-bringing her cousins, her three-year-old twins, her step-daughter Belinda, the nurserymaid, and Nanny Gilpin. Yet this ordinary outing goes wrong when Mrs. Gilpin goes off to the ladies room and fails to return. When Daisy goes to look for her, she doesn't find her nanny but instead the body of another woman dressed in a nanny's uniform. Meanwhile, Belinda and the cousins spot Mrs. Gilpin chasing after yet another nanny. Intrigued, they trail the two through the vast Crystal Palace and into the park. After briefly losing sight of their quarry, they stumble across Mrs. Gilpin lying unconscious in a small lake inhabited by huge concrete dinosaurs. When she comes to, Mrs. Gilpin can't remember what happened after leaving the twins in the nurserymaid's care. Daisy's husband, Detective Chief Inspector Alec Fletcher of Scotland Yard, finds himself embroiled in the investigation of the murdered nanny. Worried about her children's own injured nanny, Daisy is determined to help. First she has to discover the identity of the third nanny, the presumed murderer, and to do so, Daisy must uncover why the amnesic Mrs. Gilpin deserted her charges to follow the missing third nanny.

May the best man die! In July of 1923, the Honorable Daisy Dalrymple travels to Henley-on-Thames to visit her aunt and uncle, as well as to work on her latest writing assignment: covering the Henley Royal Regatta for an American magazine. Daisy plans a simple trip researching her article, enjoying the races, and, come the weekend, having a pleasant...

One morning in April 1924, the Honorable Daisy Dalrymple Fletcher finds herself in a most unenviable position. Despite her best attempts to elude the inevitable, she must face her darkest fears and with all strength and courage she can muster, must confront the one person she has tried hardest to avoid-the dentist. But upon arriving for her appoint...

In spring a young man's fancy will turn to love, and the Honorable Phillip Petrie is no exception. Daisy's chum is totally smitten with Miss Gloria Arbuckle, daughter of a millionaire Yank. But before the enthusiastic suitor can pop the question, his beloved is abducted. As a distraught Mr. Arbuckle begins assembling the ransom, Phillip enlists Dai...