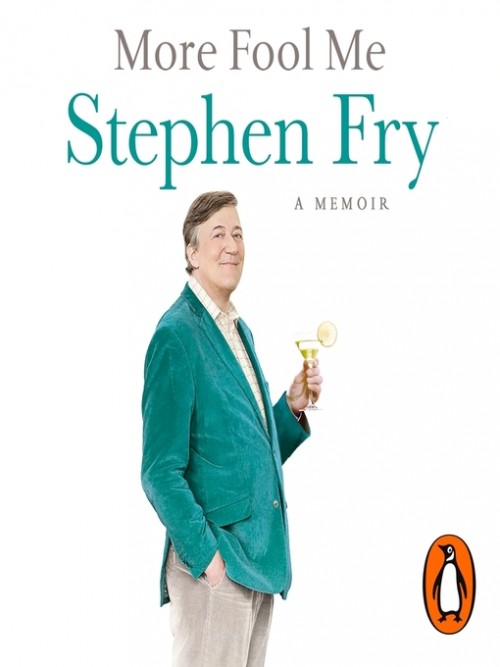 
Stephen Fry invites readers to take a glimpse at his life story in the unputdownable More Fool Me. 'Oh dear I am an arse. I expect there'll be what I believe is called an "intervention" soon. I keep picturing it. All my friends bearing down on me and me denying everything until my pockets are emptied. Oh the shame' In his early thirties, Stephen Fry - writer, comedian, star of stage and screen - had, as they say, 'made it'. Much loved in A Bit of Fry and Laurie, Blackadder and Jeeves and Wooster, author of a critically acclaimed and bestselling first novel, The Liar, with a glamorous and glittering cast of friends, he had more work than was perhaps good for him. What could possibly go wrong? Then, as the 80s drew to a close, he discovered a most enjoyable way to burn the candle at both ends, and took to excess like a duck to breadcrumbs. Writing and recording by day, and haunting a never ending series of celebrity parties, drinking dens, and poker games by night, in a ludicrous and impressive act of bravado, he fooled all those except the very closest to him, some of whom were most enjoyably engaged in the same dance. He was - to all intents and purposes - a high functioning addict. Blazing brightly and partying wildly as the 80s turned to the 90s, AIDS became an epidemic and politics turned really nasty, he was so busy, so distracted by the high life, that he could hardly see the inevitable, headlong tumble that must surely follow...Containing raw, electric extracts from his diaries of the time, More Fool Me is a brilliant, eloquent account by a man driven to create and to entertain - revealing a side to him he has long kept hidden.

For Ned, 1980 seems a blissful year. Handsome, charming, popular and talented, his life is progressing smoothly, effortlessly, happily. And when he meets the lovely Portia Fendeman his personal jigsaw appears complete. But timing is everything in life, and his life is about to change for ever. Things are going to get very bad indeed for innocent yo...

a) A fatuous, wasted, degenerate and wholly useless existence captured in delicate, lyrical and exquisitely realised prose. b) Lightly amusing anecdotes and tender reminiscences of the great men and women encountered during a rich, varied and rewarding lifetime, fondly remembered in the tranquil evening of a career of public service. c) The autobio...

Stephen Fry On the Phone, From Carphones To Executive Bricks

Stephen Fry On the Phone, From Carphones To Executive Bricks

Stephen Fry meets the brains behind the mobile phone. There are more mobile phones in the world than there are people on the planet: Stephen Fry talks to the backroom boys who made it all possible and hears how the technology succeeded, in ways that the geeks had not necessarily intended. In this second episode, he traces the evolution of the mobil...

No one loves and quarrels, desires and deceives as boldly and brilliantly as Greek gods and goddesses. They are like us, only more so - their actions and adventures scrawled across the heavens above. From the birth of the universe to the creation of humankind, Stephen Fry - who fell in love with these stories as a child - retells these myths for ou...

Stephen Fry meets the brains behind the mobile phone. Today, 85% of the silicon chips inside all mobile phones are designed by one Cambridge-based company, ARM. Two computer engineers needed some micro-processors but didn't like what they saw and decided to make their own. Strapped for cash, they designed chips that were small, cheap and exceptiona...

Stephen Fry's breathtakingly outrageous debut novel, by turns eccentric, shocking, brilliantly comic and achingly romantic. Adrian Healey is magnificently unprepared for the long littleness of life; unprepared too for the afternoon in Salzburg when he will witness the savage murder of a Hungarian violinist; unprepared to learn about the Mendax devi...

There are Heroes - and then there are Greek Heroes. Few mere mortals have ever embarked on such bold and heart-stirring adventures, overcome myriad monstrous perils, or outwitted scheming vengeful gods, quite as stylishly and triumphantly as Greek heroes. In this companion to his bestselling Mythos, Stephen Fry brilliantly retells these dramatic, f...

Ted Wallace is an old, sour, womanising, cantankerous, whisky-sodden beast of a failed poet and drama critic, but he has his faults too. Fired from his newspaper, months behind on his alimony payments and disgusted with a world that undervalues him, Ted seeks a few months repose and free drink at Swafford Hall, the country mansion of his old friend...