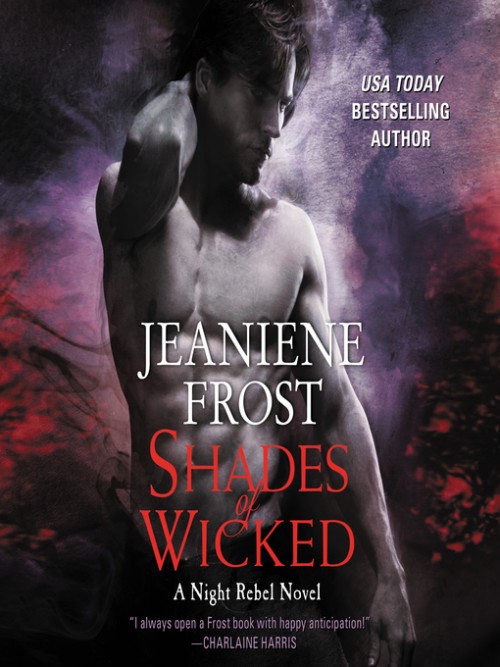 
In this thrilling new Night Rebel series set in New York Times bestselling author Jeaniene Frost's Night Huntress world, sexy and ruthless vampire Ian finally meets his match! The Rule Breaker...Master vampire Ian is unrepentant, shameless...and every shade of wicked. He's made one too many enemies in his two centuries of existence, including Dagon, a demon who now lays claim to his soul. Ian's only chance to escape Dagon is to join forces with a Law Guardian, but he's never been able to abide by the rules for long. The Law Maker... Veritas' normal role is police, judge, and jury to reprobates like Ian. But she has her own ax to grind with Dagon, so if she can use Ian as bait...well, all's fair in law and war. As they scour supernatural hotspots to perfect their trap, Veritas soon realizes Ian's carefully cultivated, devil-may-care roguish image hides something much more powerful. And Ian discovers Veritas has shocking secrets of her own. As they're drawn to each other with a passion as intense as their peril, either love or justice will prevail. But each will have devastating consequences.

Night Huntress Book 6: One Grave At A Time

Night Huntress Book 6: One Grave At A Time

The grave is one wrong step away. Having narrowly averted an (under)world war, Cat Crawfield wants nothing more than a little downtime with her vampire husband, Bones. Unfortunately, her gift from New Orleans' voodoo queen just keeps on giving-leading to a personal favor that sends them into battle once again, this time against a villainous spirit....

Revisit Cat and Bones in this companion anthology to the Night Huntress series, and see what could've happened.With deleted scenes-some never-before-seen by the public-and alternate histories, forgotten side-plots, additional love scenes, and increased personal revelations, this anthology is the culmination of the decade's worth of hidden work that...

Isabella Spaga is about to reluctantly walk down the aisle with Mr. Dangerously Wrong...but not if dashing vampire Chance has anything to say about it. As a favor to Bones, Chance has come to derail this wedding of beauty to the beast. Now if only he can keep his hands off the bride. From New York Times bestselling author Jeaniene Frost's Night Hun...

Originally appeared in the print anthology The Bite Before Christmas. 'Tis the season to join Cat and Bones for some holiday cheer in this Night Huntress novella by USA Today and New York Times bestselling author Jeaniene Frost. They were looking forward to a normal holiday-at least as "normal" as it gets for vampires Cat and Bones and their otherw...

Night Huntress Book 7: Up From the Grave

Night Huntress Book 7: Up From the Grave

There's always one more grave to dig. Lately, life has been unnaturally calm for vampires Cat Crawfield and her husband, Bones. They should have known better than to relax their guard, because a shocking revelation sends them back into action to stop an all-out war . . .A rogue CIA agent is involved in horrifying secret activities that threaten to...

Night Huntress Book 5: This Side of the Grave

Night Huntress Book 5: This Side of the Grave

Danger waits on both sides of the grave...Half-vampire Cat Crawfield and her vampire husband Bones have fought for their lives, as well as for their relationship. But just when they've triumphed over the latest battle, Cat's new and unexpected abilities threaten to upset a long-standing balance. With the mysterious disappearance of vampires, rumors...

Blake Turner had it all-until a demon decided to take residence in his soul. Plagued with constant black outs and a trail of dead bodies in his wake, Blake thinks vampire Elise is his best chance at ending the nightmare. It's just too bad he's fallen in love with the gorgeous vamp right before he has to die... Featuring characters from New York Tim...

In New Orleans, a pair of undead serial killers is about to turn Mardi Gras into a horror show-unless the immortal hitman Bones can hunt them down first. From Jeaniene Frost comes a thrilling novella featuring characters from her New York Times bestselling Night Huntress series. Originally appeared in the anthology Unbound.

An immortal war has been brewing in the darkness ... and now one woman has stumbled into the shadows. Chicago private investigator Kira Graceling should have just kept on walking. But her sense of duty refused to let her ignore the moans of pain coming from inside a warehouse just before dawn. Suddenly she finds herself in a world she's only imagi...