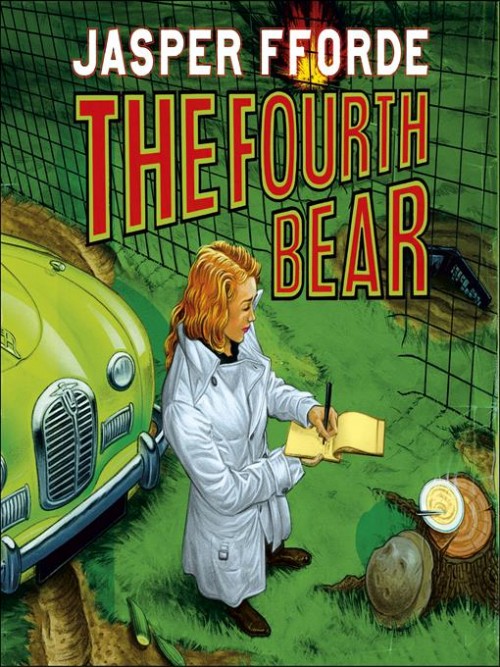 
The Gingerbreadman: Psychopath, murderer, and biscuit is loose in the streets of Reading. He and Mary Mary have been reassigned due to falling levels of nursery crime. That is, until a chance encounter during the Armitage Shanks literary awards at the oddly familiar Deja-Vu Club lead Jack and Mary on the hunt for missing journalist Henrietta 'Goldilocks' Hatchett. She had been about to break a story involving unexplained explosions in Herefordshire, Pasadena and the Nullabor Plain; The last witnesses to see her alive were The Three Bears, comfortably living out a life of rural solitude. But all is not what it seems. Was Goldy's death in the nearby 1st World War themepark of Sommeworld a freak accident? But there's more. What does a missing scientist with a terrifying discovery in subatomic physics, a secret weapon of devastating power, a reclusive industrialist known only as the Quangle Wangle and Colonel Danvers of the National Security all have in common?

There is another 1985, somewhere in the could-have-been, where the Crimean war still rages, dodos are regenerated in home-cloning kits and everyone is deeply disappointed by the ending of 'Jane Eyre'. In this world there are no jet-liners or computers, but there are policeman who can travel across time, a Welsh republic, a great interest in all thi...

Fourteen years after her last adventure, Thursday Next, literary detective, finds herself in an unusual situation her job policing the fictional characters of the BookWorld has been downgraded since her previous escapades are now themselves in print. However, a pressing threat may call her back into action: first Sherlock Holmes and then Miss Marpl...

Lost In A Good Book

Lost In A Good Book

Thursday Next, literary detective and newlywed, is back to embark on an adventure that begins, quite literally on her own doorstep. It seems that Landen, her husband of four weeks, actually drowned in an accident when he was two years old. Someone, somewhere, sometime, is responsible. The sinister Goliath Corporation wants its operative Jack Schitt...

There is another 1985, somewhere in the could-have-been, where the Crimean war still rages, dodos are regenerated in home-cloning kits and everyone is deeply disappointed by the ending of 'Jane Eyre'. In this world there are no jet-liners or computers, but there are policemen who can travel across time, a Welsh republic, a great interest in all thi...