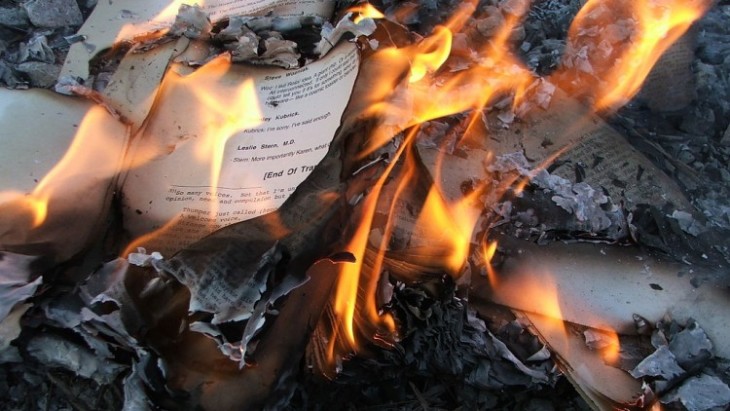 Down With This Sort of Thing: Banned Books You Can Listen To

Over in the US, the folks at Banned Books Week are “Celebrating the Freedom to Read”, so we’re also taking a look at some famous banned and censored books that, for many of us, seem utterly harmless.

Because of its magic, witchcraft and ‘occult themes’, religious groups took offence to the titles. In Kent, St. Mary’s Island Church of England School banned the book due to this, but the US saw far more calls for bans, with the first four books being at the top of The American Library Association’s list of most challenged books.

In September 2007, Pastor Ron Barker of St. Joseph Church, Massachusetts pulled the book from the parish’s school shelves. He said that his actions were akin to banning peanut butter to protect children with an allergy, adding: “What I did is start a spiritual peanut butter ban on Harry Potter.”

If you think you can get through the series without becoming a sorcerer or witch, the good news is that we have the whole series to download and stream on OverDrive for Listening Books members here.

Or you can get them on MP3 CD, starting with Listening Books number 11120CD.

1984: Reading This Book Probably Puts You on a List Somewhere

The dystopian novel where people’s activity is monitored, independent thought is suppressed and works critical of the state were censored was banned by the American Libraries Association for being a “bleak warning of totalitarian government and censorship”. They did not, however, go as far as to also remove the word irony from the dictionary.

Meanwhile, the book, which was called pro-Communist by those critical of it in the West, was also banned in the USSR as they believed it criticised the Soviet system.

Thankfully the world of 1984, written in 1949, never became a reality, so it is possible to listen to the uncensored book on Listening Books if you are a member.

Use your GPS, camera and microphone equipped phone or your web cookie filled computer to stream or download the book on OverDrive here.

Lady Chatterley’s Lover: Would You Let Your Servant Read it?

First published in 1928, the book was banned right here in the UK all the way until 1960 (heavily censored versions were published in the interim) due to the descriptions of sex, the fact that it was happening between a working-class man and an upper-class woman, and the use of rather naughty four letter words.

In 1960, Penguin published the uncensored edition and was taken to court under the Obscene Publications Act 1959. The publisher thankfully won, and the prosecution was shown to be completely out of touch with ‘60s reality after chief prosecutor Mervyn Griffith-Jones asked if it were the kind of book “you would even wish your wife or servants to read”.

The victory was a landmark result that liberalised publishing and was seen by some as the beginning of a more permissive society in Britain.

To see what all the raunchy fuss is about, Listening Books members can check it out for download and stream on OverDrive here.

All Quiet On The Western Front: A Title That Caused a Lot of Noisy Protests

This banned book was burned by angry Nazis who thought it disparaged Germany and the concept of warfare.

‘All Quiet on the Western Front’ by WWI veteran Erich Maria Remarque described the extreme mental and physical stress of German soldiers during the Great War and resonated with soldiers and civilians alike, becoming an instant success.

But the Nazi party were openly against the title as they struggled for power and, when they managed to gain control of the nation, Joseph Goebbels banned and publicly burned Remarque’s books.

With the Reich failing to take over the world, ‘All Quiet’ has survived to not want to fight another day, so Listening Books members can download and stream in on OverDrive over here.

You can also get it on MP3 CD at Listening Books number 05176CD.