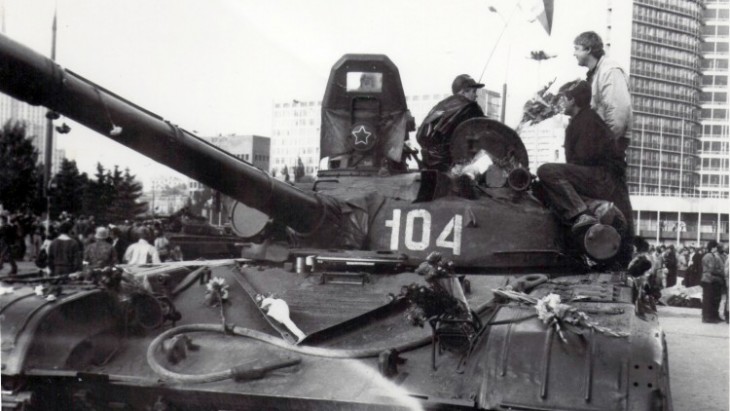 The August Coup: A True Tale of Soviet In-fighting

With Russia dominating the headlines, today’s story takes a brief look at the fall of the Soviet Union, focusing on the 1991 August Coup that saw Soviet president Mikhail Gorbachev briefly arrested.

Gorbachev had received a lot of resistance for the reform plans he had been enacting since gaining power in 1985, notably among non-Russian members of the Union who wished to secede. With food shortages, economic failures and political in-fighting, mood turned against the Soviet Union and countries began to declare their independence.

To stabilise the superpower, the president pushed for a new Union, with the aim to establish a democratic constitutional state within a liberalized Soviet Union. However, the New Union Treaty did not please everyone — while Gorbachev was on holiday in August 1991, members of the State Committee on the State of Emergency studied the document at a KGB retreat and feared that it would lead to the end of the Soviet Union.

The Committee doubled the pay of all KGB personnel, calling them back from holiday and putting them on high alert. They also ordered 250,000 pairs of handcuffs for Moscow, along with 300,000 arrest forms.

Declaring a state of emergency, Yanayev signed a decree naming himself as acting USSR president, claiming that Gorbachev was unable to do his duty due to “illness”.

While they took control of the radio and press, Russian SFSR President Boris Yeltsin used flyers to declare that a reactionary anti-constitutional coup had taken place, urged the military not to take part, called for a general strike, and demanded that Gorbachev be allowed to talk to the populace.

Yeltsin, his supporters, a sympathetic military division, and some civilians, barricaded the White House, Russia’s building of Parliament. In the early hours of August 21st, the Committee attacked, but were unsuccessful after a general informed the White House when the invasion would begin.

Gorbachev, with communications restored, declared the Committee’s decisions void and dismissed its members from their state offices, arresting the instigators.

The attempted coup forced Gorbachev to reassess the political state of affairs, and on the 24th he resigned as the head of the Communist Party of the Soviet Union and dissolved the party five days later.

Of course the coup, what led to it and what it caused, requires a lot more coverage than this simple post to do it justice, but thankfully we at Listening Books have the answer.

If you’re a member, we have the landmark BBC series ‘Russia: A 1,000 Year Chronicle of the Wild East’ to download and stream. The series covers the 1,000 year history of the great bear. Filled with history, music from Russian composers including Glinka, Tchaikovsky, Borodin and Shostakovich and readings from Russian authors and historians such as Alexander Solzhenitsyn and Vasily Grossman, this is a true treat for the ears.