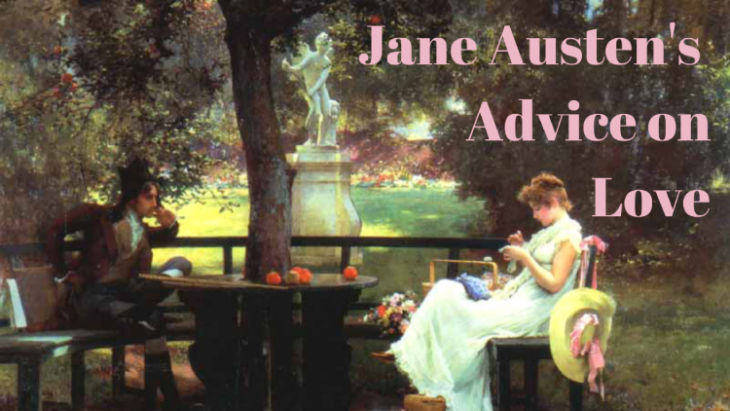 Over 200 years on since her death, Austen’s advice on love, relationships and marriage is just as pertinent, because despite never marrying herself, all of her novels have love and relationships at their core.

They are powerful stories that still feel relevant today, whether it’s Elizabeth and Darcy’s pride that almost gets in the way of their love, or Anne Elliot being persuaded against Captain Wentworth by her family.

Even if you have listened to all of Austen’s novels hundreds of times, it’s always worth going back and hearing her advice again. So here's some of the best advice from Austen’s novels and letters, collected by theme:

On the importance of being you:

‘Woman is fine for her own satisfaction alone. No man will admire her the more, no woman will like her the better for it.’ -- Northanger Abbey

This is the Regency equivalent of ‘don’t change yourself to please your partner’ – put your own happiness and satisfaction first, the rest will follow.

‘Give a girl an education and introduce her properly into the world, and ten to one but she has the means of settling well, without further expense to anybody.’ – Mansfield Park

This is said by Mrs. Norris as justification for Sir Thomas Bertram to take in Fanny Price, but it stands as good advice nonetheless. It’s always best to concentrate on getting an education early – it’ll set you up for life.

On the importance of choosing a good partner:

‘Where youth and diffidence are united, it requires uncommon steadiness of reason to resist the attraction of being called the most charming girl in the world.’ – Northanger Abbey

Catherine Morland is, at first, charmed by the terrible John Thorpe, as he is very complimentary towards her. However, Austen proves it is important not to be too taken in by lovely compliments, as John Thorpe turns out to be blustering, rude, and a liar.

‘Her father, captivated by youth and beauty, and that appearance of good humour which youth and beauty generally give, had married a woman whose weak understanding and illiberal mind had, very early in their marriage, put an end to all real affection for her. Respect, esteem, and confidence had vanished forever; and all his views of domestic happiness were overthrown.’ – Pride and Prejudice

In considering the unhappy marriage of Lydia and Wickham, Elizabeth also looks to her own family as an example of a bad marriage. Mr and Mrs Bennet married too quickly, both ending up unhappy in their choice. Their dislike for each other, Elizabeth thinks, leads to Lydia’s own poor choice of partner.

On the importance of equality in a marriage:

‘He is a gentleman, I am a gentleman’s daughter; so far we are equal.’ – Pride and Prejudice

Perhaps Mr Darcy has vastly more money than Elizabeth Bennet, but they are equal in character, which is the most important.

‘There are such beings in the world – perhaps one in a thousand – as the creature you and I should think perfection; where grace and spirit are united to worth, where the manners are equal to the heart and understanding; but such a person may not come in your way, or, if he does, he may not be the eldest son of a man of fortune, the near relation of your particular friend, and belonging to your own country.’  - Letter to Fanny Knight, 1814

Despite the difficulty in finding a man to marry who matches all of these points, Jane Austen insists that Fanny, her niece, should look for them all anyway.

On the importance of friendship:

‘Friendship is certainly the finest balm for the pangs of disappointed love.’ – Northanger Abbey

Always have a friend to confide in, but...

‘My idea of good company, Mr Elliot, is the company of clever, well-informed people, who have a great deal of conversation; that is what I call good company.’ – Persuasion

...try to make sure that friend is good company too!

On the importance of love in a relationship:

‘I have given him my consent. He is the kind of man, indeed, to whom I should never dare refuse anything, which he condescended to ask. I now give it to you, if you are resolved on having him. But let me advise you to think better of it. I know your disposition, Lizzy. I know that you could be neither happy nor respectable, unless you truly esteemed your husband.’

Elizabeth Bennet’s father worries that she will struggle to be married to Mr Darcy, as to be married without love would make her miserable. Thankfully, however, she does love him.

‘The unpleasantness of appearing fickle is certainly great; but if you think you want punishment for past illusions, there it is, and nothing can be compared to the misery of being bound without love – bound to one, and preferring another; that is a punishment which you do not deserve.’ – Letter to Fanny Knight, 1814.

Austen writes to her niece, Fanny, and tries to school her against marrying someone she doesn’t love, even if that makes her look fickle to the outside world. It is better to look fickle than be stuck in a loveless marriage, after all!

Click here to dive into the Jane Austen audiobooks in our collection!