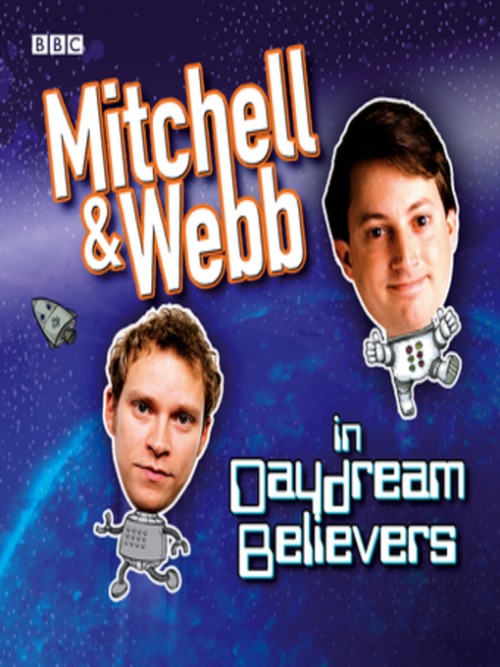 
Daydream Believers, written by and starring David Mitchell and Robert Webb, follows the parallel stories of two flatmates, Ray and Colin, and the mighty alien empire of Baron Amstrad and Info, his retro-looking android. Ray (Mitchell) writes popular science fiction stories when he doesn't get writer's block. He does, however, get many interruptions - thanks to his lodger, Colin (Webb). Colin starts ante-natal classes in the hope of finding a girlfriend, and Colin and Ray's kitchen is suddenly infested with ants. Meanwhile, in the infinite reaches of space, Baron Amstrad is feeling a bit broody, and the galaxy is suddenly invaded by ruthless alien hordes...The Baron gives birth to an idea that might just help. But Will Colin get lucky with a girl? Does the red alert have to be so loud? And do the alien Labradons look more like locusts, bees, ants - or dogs? David Mitchell and Robert Webb are the stars of the Bafta award-winning That Mitchell & Webb Look (BBC2), That Mitchell & Webb Sound (BBC Radio 4) and Peep Show (Channel 4). As heard on BBC Radio 2, Daydream Believers also stars Mark Benton, Olivia Colman, Simon Greenall and Mark Evans.

David Mitchell &amp; Robert Webb star in the complete third series of their Sony Award-winning comedy show - as broadcast on BBC Radio 4. Here the duo return to their radio roots, and this third series finds them in their finest ever sketch-show form.

More sketches from the inside-out world of David Mitchell and Robert Webb, including what James Bond is really like as a party guest, and the rather too exciting world of Rabbit Newsnight. Their distinctive and lopsided view of the world includes the worst possible name for a dry cleaning shop; the brave and dangerous work of Hairdressers Sans Fron...

An apocalyptic cult member, a jazz buff in Tokyo, a woman on a holy mountain, a burnt-out lawyer, a Mongolian gangster, a redundant spy, a despondent 'zookeeper', a nuclear scientist, a ghostwriter, a ghost, and a New York DJ are all tenuously connected. All of them have tales to tell, and all must play their part as they are caught up in the inesc...

Souls cross ages like clouds cross skies.Six interlocking lives - one amazing adventure. In a narrative that circles the globe and reaches from the 19th century to a post-apocalyptic future, Cloud Atlas erases the boundaries of time, genre and language to offer an enthralling vision of humanity's will to power, and where it will lead us.